Insight on the News - World 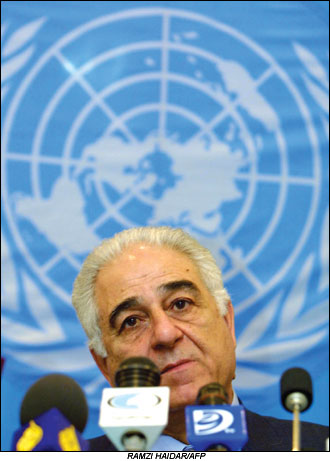 A team of international forensicinvestigators is preparing to blow the lid off the much-disputed U.N.oil-for-food program in Iraq and will present new evidence ofcorruption at an upcoming congressional hearing that directly willimplicate world leaders and top U.N. officials, Insight haslearned.

Investigators, led by ClaudeHankes-Drielsma and the KPMG accounting firm, currently are inBaghdad sifting through mountains of Saddam Hussein-era recordsseized from his Oil Ministry and the State Oil Marketing Organizationthat detail payments by Saddam to his legions of foreign friends andpolitical supporters. An Iraqi newspaper, Al-Mada, published the listof 270 recipients of special "allocations" (also known as vouchers)in January. But as Insight goes to press, the testimony ofHankes-Drielsma on April 22 before the House International RelationsCommittee is expected to provide new evidence of widespreadinternational corruption.

In a scathing letter sent to U.N.Secretary-General Kofi Annan on March 3, which he made available toInsight, Hankes-Drielsma called the U.N. program "one of the world'smost disgraceful scams," and said that "based on the facts as I knowthem at the present time, the U.N. failed in its responsibility tothe Iraqi people and the international community atlarge."

In an earlier letter to Annan, towhich he received no reply, Hankes-Drielsma noted that allocations of"very significant supplies of crude oil [were] made to ...individuals with political influence in many countries, includingFrance and Jordan," both of which supported Saddam and his regime tothe bitter end.

Under the U.N. program, the Dutchcompany Saybolt International BV was paid hefty fees to inspect oiltankers loading Iraqi crude in Basra, to make sure no cheating tookplace. "Now it turns out that the inspecting company was paid off,"one investigator said, "while on the ground, individual inspectorswere getting cash bribes." Saybolt denies it received an oilallocation, although the Iraqi documents show it was down for 3million barrels.

Saybolt spokesman Peter Box tellsInsight that the company's own investigation of two known incidentsof "topping off" involving the oil tanker Essex in 2001 "found noinvolvement of our staff at that particular time." Saybolt continuesto operate in Iraq today, although it now has an "entirely new groupof people," Box adds.

Among the revelations at the April22 hearings, Insight has learned from investigators directly workingon the case, will be new details of oil vouchers allegedly granted toPatrick Maugein, a prominent crony of French President JacquesChirac, said to total 72.2 million barrels.

Maugein's involvement in theU.N.-approved oil deals is significant, investigators say, because heis believed to be a conduit for backdoor payments to Chirac and hisfamily. It was Chirac who spearheaded a worldwide coalition last yearthat opposed the U.S.-led invasion of Iraq and tried desperately tokeep Saddam in power.

When the allegations of backdoorpayments first surfaced in a Paris courtroom in 1998, Maugein sweptthem aside as "pure fantasy." And in a statement provided to Insight,he denies having raised funds for Chirac, his family or his politicalcampaigns. But as more evidence begins to leak from the archives ofSaddam's former oil ministry, such denials may become harder tosustain.

The vouchers were assigned to twotrading companies, identified in the Iraqi documents as Trafigura andIbex, both of which were involved in the Essex incident.Investigators say they believe both companies are tied to Maugein,either through beneficial ownership or contractual arrangement.Vouchers for an additional 11 million barrels were granted to Maugeinbusiness partner Cabecadas Rul de Soussa, according to the originalAl-Mada list. The ties between de Soussa and Maugein were firstrevealed by Therese Raphael of the Wall Street JournalEurope.

Asked about the allegations byInsight, Maugein denied he was involved with either company, althoughhe did acknowledge knowing their principals, with whom he had workedas an oil trader with Marc Rich in Switzerland. He insisted that allhis dealings with Iraq were legal and conducted through theoil-for-food program. "Patrick Maugein bought oil for his refinery inMantua, Italy," a spokesman said. "All the oil deals were run by theU.N. They were paid through the U.N. and monitored by the U.N."

But those denials might notwithstand the onslaught of the documents about to be released,investigators say. "Already we've got details of all the accountsheld in the names of individuals," one investigator tells Insight inan exclusive interview. "On these records are exact details of whichaccounts were held by whom," including the foreign proxies and theirultimate beneficiaries - in Iraq and overseas.

The Iraqi documents specifically tieMaugein to the 25 million barrels allocated to Trafigura Beheer BV, acompany Maugein claims was a competitor of his own London-based SOCOInternational. Investigators say other information they havedeveloped shows that Maugein could be a "beneficial owner" of IbexEnergy, a holding company registered in Bermuda that was awardedvouchers for 47.2 million barrels. "That is a very high allocation,"an investigator tells this magazine. "If a Cabinet minister gets 12million barrels, why would Ibex get 47 million barrels unlesssomething much bigger was at stake?"

Firzli acknowledged in a lengthyinterview with Insight in Paris that the Iraqis were desperate tomeet with Chirac and were willing to pay a high price for access.Shortly before the war broke out in March 2003, Firzli says heintroduced Iraqi diplomat Nizar Hamdoon - sent as an emissary fromSaddam - to senior French government officials in Paris. But Firzliscoffed at the oil vouchers, calling them "small stuff compared tothe billions of dollars people made in the 1980s."

Published reports to date havefocused on oil vouchers granted to the head of the United Nation'soil-for-food program, Benan Sevan, who has been on an extendedvacation since the allegations first surfaced at the end of January.He denied the charges through a U.N. spokesman. And Insight haslearned that as investigators pursue the document trail, they believethey are getting closer to world leaders, includingChirac.

But can it be proved? "The Iraqicivil service, even under Saddam, was quite excellent. They keptmeticulous records. Every order was cross-referenced, initialed andcounterinitialed, so nobody could be accused of taking anything forhimself," an investigator who recently returned from Baghdad tellsInsight.

Rep. Henry Hyde (R-Ill.), chairmanof the House International Relations Committee, sent a letter to U.N.Secretary-General Annan on April 1, which committee staffers tellthis magazine was intended to "lay down a marker." It called thescandal "without precedent in U.N. history" and urged Annan to makehis response "equally unprecedented." Annan has announced that hewill name an independent panel to investigate.

Fears of a U.N. whitewash run highon Capitol Hill. Hyde urged Annan to take steps to ensure that alldocuments relating to the oil-for-food program "be preserved andsecured," and asked that special measures be taken to protectpotential whistle-blowers who could provide testimony on the illicitdeals. The United States General Accounting Office, the investigativearm of Congress, told Hyde's committee recently that $10.1 billion ofthe estimated $60 billion handled by the United Nations under theprogram was paid in kickbacks, bribes and set-asides to Saddam andhis cronies.

The KPMG forensic-accountinginvestigators were brought to Baghdad by the Iraqi Governing Councilto get to the bottom of the scandal. But Insight has learned that theCoalition Provisional Authority (CPA), led by J. Paul Bremer,recently took over the investigation, just as the accountants werestumbling over evidence of corruption by Americans working for theCPA. "We were hearing stories of contractors passing envelopes withhuge amounts of cash to CPA officials," an investigator says. "Asmuch as $300,000 in cash passed hands."

Speaking from Baghdad, an Iraqiofficial confirmed to this magazine that the CPA was now in charge ofthese matters, although the Iraqi Governing Council was footing thebill. "We no longer have control over the documents or theinvestigation," the official said.

In Washington, the StateDepartment's Bureau of International Organizations is in charge ofrelations with the United Nations. In preparation for the April 22hearing, Chairman Hyde has sent two letters to Assistant Secretary ofState Kim Holmes requesting that State provide full documentation ofthe oil-for-food program, including commercial contracts. Since theUnited States is a permanent member of the Security Council and aleading member of the U.N. Sanctions Committee, State has access tothe full United Nations record but has been unwilling to makeincriminating information public until now for fear of angering U.S.allies. France accounted for approximately 25 percent of allU.N.-approved trade with Iraq, according to an estimate by theCIA.

"Give France a break," says Frenchambassador to the United States Jean-David Levitte, writing in theLos Angeles Times. He said allegations that France condoned kickbacksor took bribes "are completely false and can only have been an effortto discredit France, a longtime friend and ally of theU.S."

Kenneth R. Timmerman is a seniorwriter for Insight and author of TheFrench Betrayal of America,just released from Crown Forum.